He wears a cape, and his superpower is agapao. #DavidParrish

Two years ago, I shared the story behind my love of Valentine’s Day in a letter to my friend David Parrish. I told him that I had always adored the elementary school ritual of exchanging Valentines with classmates. I reminisced about bringing home my lunch bag of cards, finding a quiet place, and pouring over them, reading the glib captions as if they mattered, as if each sender had chosen that one particular mass-produced tiny toss-away just for me. One year, our teacher helped us make miniature mailboxes into which we “delivered” our Valentines. I played with that cache of cards for months.

I look back on that whole thing now and think Wow. What a nerd. The kindest interpretation of the kid I once was is that I’ve always been a scribe at heart, but the truth is: this is undeniable evidence of weirdness. At any rate, in my letter, I let the memories fly and then forgot all about it.

One month later, I received a bulging brown envelope from David. Inside were many, many Valentines. Some were from David. Others were from his friends, most of whom I had not met. I was quizzical. Why would David send me more than one Valentine? And who are these other people who wrote such lovely notes upon their cards? Then, suddenly, a big smile lit my face. I understood that David’s gift was nothing less than the attempt to re-create a treasured childhood tradition.

I expected that David’s gift of the heart would remain a benchmark of Valentine thoughtfulness but I was wrong. This year he surpassed the high mark he himself had set.

David, who has Lakota or Sioux blood on one side of his family and Ojibwa or Chippewa on the other, tells me that it is not the blood that makes one Indian so much as the heart. In a recent letter, David gave me a stunning compliment by saying I have a “Native” heart and declared me “Tioshpaye,” which means “extended family.”

He knows me well. He knows that I am like the Native North American Indian in that I believe all of life is sacred and deserving of respect, consideration, appreciation and prayers.

This Valentine’s Day, David proved the sincerity of his compliment: he sent me a box containing everything I need to conduct the traditional ceremony known as the Four Directions Prayer for the Making of a Relative. 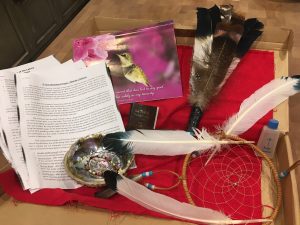 I’m pretty sure he would rather have conducted the ceremony for me. There’s just one hitch: David is a resident at Indiana State Prison. He’s been there for a very long time, and, stupidly, will be there for years to come. So, since he himself cannot perform this sacred ceremony in which the four seasons, four directions, four races of mankind, and four chambers of the human heart are recognized and honored, he bequeathed his own personal ceremonial tool chest to me.

A philosopher by nature, David has studied the religions of the world. He now considers himself “a relative of the whole world,” and respects all expressions of religion, spirituality, goodness and love. This is one of the reasons why we have become such great friends: both of us are respectful of your chosen way even though it differs from ours.

Even though he has moved on from a strictly Native religious affiliation, he wrote two typewritten pages of instructions on how to conduct this special ceremony and the meanings behind the tools and gestures. “If you do this ceremony or say these prayers,” he summarized, “you align yourself with the philosophies of the Native American and in your heart and in your soul you “Become a Relative” or what the Indian people would call “All My Relations” or “Tioshpaye.” These tools that I give you are sacred and have been used in many ceremonies. They are yours now and are meant to be used, not just looked at and admired as art.” At the end of his tutorial, David revealed my new Native name: Dancing Bird. It couldn’t be more perfect.

David and I have become great friends since we first met in July 2010. We have come to know one another very well through the letters we have exchanged over the course of more than eight years. In The Forest for the Trees: An Editor’s Advice to Writers, author Betsy Lerner observes,

Today too little is made of all the writing that doesn’t seek
publication, all the letter-writing, e-mail sending, recipe copying, and
diary-keeping—all the writing that minds our lives. Now there is a great
emphasis on turning one’s diary into a published memoir or novel, and
any number of books will advise you how to do so. But I believe there is
still enormous value in the piece of writing that goes no farther than the
one person for whom it was intended, that no combination of written words is more eloquent than those exchanged between lovers or friends . . .

I would agree with Ms. Lerner. In fact, my favorite thing to write is a letter, and the very best of my writing can be found on pages where heart-to-heart talks between me and one other person have taken place.

If you don’t have a pen pal, maybe you should reach out and find one. Prisons are a good place to start. There are 2.3 million prisoners in America; almost every prisoner I met while writing Camerado, I Give You My Hand told me that they longed for a pen pal.

What I learned about David in our exchange of letters is that he is hyper-alert to the needs of others. He worries about people. He prays for them. If he can’t get through to someone in need, he pokes around until he finds someone who can. His job (he works for the prison chapel) requires him to be skilled in many ways. He must be good with people, technology, music, and performance art. He is a musician, a producer, and a technician whose responsibilities include making certain every worship service, meeting, performance, program, and visit from a group on the outside is successful. No matter how overwhelming or stressful the event might be, David remains cognizant of how someone in emotional or psychological duress might benefit from having a role to play in that production. Selflessly, then, he recruits, coaches and mentors that man. In a place like prison, nobody has much of anything. Even so, David finds ways to share the wealth—and by “wealth” I mean those fleeting moments when a man is given a chance to feel a sense of accomplishment or pride. Something just a little bit more than nothing.

Love is many things. For just one moment, imagine that all the sensed and experienced aspects of love could be contained within a triangle.

Crowning the vertex of this triangle of love is agape love.

What is agape? Ancient Greeks as well as the authors of the Bible honored agape as the absolute highest form of love. It is love not as a noun but as a verb. It is sacrificial because it is selfless. This is the kind of love that shows up for others.

Agapao, then, is agape love in motion. Love propelled. Love as movement toward. We recognize that agapao is in the room when our hearts are touched. When our perception of existential solitariness is dispelled. When we feel as if something inside that was hurting has been healed.

So when I say that David’s superpower is agapao, yes, I am thinking of the extraordinary kindnesses he has shown me on two St. Valentine’s Days. Much more significantly, however, I am seeing him as he moves through life in an environment that fosters lifelessness. He is wearing a khaki-colored cape and he is the very embodiment of agapao.

Thank you @bobdylan for spending 559 minutes with me this year on @Spotify. You are my #1. #SpotifyWrapped https://open.spotify.com/artist/74ASZWbe4lXaubB36ztrGX

BREAKING: Donald Trump Jr’s big conservative event in Missouri is cancelled after JPMorgan Chase refuses to let them use their payment processing system because they don’t want it used for “hate, violence, or racial intolerance.” RT TO RUB IT IN HIS FACE!

BREAKING: The FBI has RAIDED the home of Lauren Boebert's former campaign manager to investigate whether the associate took part in an election security breach involving voting machines.

How does that make you feel?

Passive-aggressive behavior abounds in workplaces. Here are some of the most common offenders. https://www.huffpost.com/entry/passive-aggressive-phrases-people-say-at-work_l_616462c1e4b019644427d691?utm_campaign=share_twitter&ncid=engmodushpmg00000004 # via @HuffPostLife